I am a fugitive and a vagabond, a sojourner seeking signs. 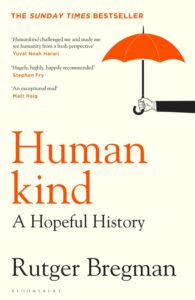 And still the argument continues. William Golding reads Robert Ballantyne’s The Coral Island to his children and it eats away at him. Rutger Bregman reads Lord of the Flies as a teenager and takes Golding on in his book Humankind: A Hopeful History. In it he concludes because Golding was a depressed alcoholic writing out of his own depraved self-knowledge, how could he possibly write anything hopeful about the nature of humanity? Bregman, himself, is the child of a teacher and a pastor, an idyllic and uneventful childhood combination it seems.

Bregman broadens out his criticism: “For centuries, western culture has been permeated with the idea that humans are selfish creatures,” he says. “That cynical image of humanity has been conveyed in films and novels, history books and scientific research. But in the last 20 years, something extraordinary has been happening. Scientists from all over the world have switched to a more hopeful view of mankind.” He claims this movement is so new there isn’t a name for it yet.

To refute Golding, he goes in search of a real Lord of the Flies example to find out if children really would descend into the terrible state they got into on the island. While Bregman doesn’t mention The Coral Island, he seems confident his search will lean that way. With some sleuthing he finds his answer in a group of shipwrecked boys from a Catholic boarding school in Tonga. In 1966 they set off on what they called a “borrowed boat” on a fishing trip in 1966 and get caught in a storm. Sighting an island, they manage to swim ashore. While on their own for fifteen months, according to Bregman, the boys cooperate, enforce timeouts for disagreements, begin and end each day with a song and prayer, and keep a fire going constantly.

After their rescue, when they arrive back in Tonga, the boat owner charges them with theft and they are put in jail. The captain who rescued them, Peter Warner, sells the Australian rights to their story to get them out of jail and to compensate the owner for his destroyed boat.

Another writer, Kate Lyons, interviewed one of the shipwrecked boys, now a man in his seventies, named Mano Tatau. He says the story was a lot more harrowing than as Bregman told it. They were scared, they hated being there, missed their families, but for the most part managed to work things out.

Lyons says some of the Tongans were upset with Bregman because the story was told mostly from the point of view of the white man who rescued them. As well, the island where the boys landed had not always been uninhabited. In the past a slave ship had appeared and taken the people living there at a time when tens of thousands from the South Pacific were kidnapped, tricked or coerced into slavery around the world. Additionally, there were objections to the fact that Warner owned and sold the rights to the story of the boys’ rescue. Tatau says that is when the real Lord of the Flies began.

The fact remains the boys stole a boat while running away from bad food they didn’t want to eat at their school. At times they disagreed. As with The Coral Island, however, they used forgiveness to reconcile with each other and they sang songs to raise their spirits. That is something Golding’s boys didn’t do.

Perhaps of the three authors, Bregman is the only one who doesn’t see any darkness in our hearts. Do we disown and discard the many, many explorations of the mix of good and evil we are, gifts given to us from the past, as Bregman would have us do?

There is no doubt the idea of original sin raises strong feelings as our bus is buffeted by wind on all sides.

Luke thinks sins badly need updating, and he keeps a running list in his head of contemporary sins that religions might well consider: the willingness to tolerate information overload; the neglect of the maintenance of democracy; the deliberate ignorance of history; the equating of shopping with creativity; the rejection of reflective thinking; the belief that spectacle is reality; vicarious living through celebrities. And more, so much more.

Off the Beaten Path:

Kate Lyons’ interview with one of the survivors: https://www.theguardian.com/world/2020/may/13/the-real-lord-of-the-flies-mano-totau-survivor-story-shipwreck-tonga-boys-ata-island-peter-warner

Player One is also available in novel format.